All the flavors of a loaded baked potato comes together beautifully in this satisfyingly creamy and comforting soup!

So now that I work from home all day, I get to watch a lot of television. How I Met Your Mother, Grey’s Anatomy, Charmed, Law and Order SVU, Gilmore Girls – you name it (oh and btw, half these shows are on Lifetime, which is like the best network ever).

But yesterday I couldn’t watch my Grey’s reruns because they played A Walk to Remember instead. Now this movie came out when I was in the 8th grade, and I was completely googly-eyed over 24-year old Shane West. Now that it’s on 11 years later, nothing has changed, except I’m crying in almost every scene – when Shane West takes Mandy Moore to the state line and she’s in two places at once, or when he names a star after her –  yeah, sob fest all over.

I think I need to get out more.

But the good thing about working from home is that I can raid the kitchen and gobble up anything and everything, like this loaded baked potato soup. This oh-so-creamy and rich, carb-loaded, cheesy, bacony, comforting, cozy soup that I can eat all day long. It’s honestly become one of my favorite soups ever, and I’ve had it 3 times this week already! With the melted cheddar and the crispy bacon bits, how can you resist? 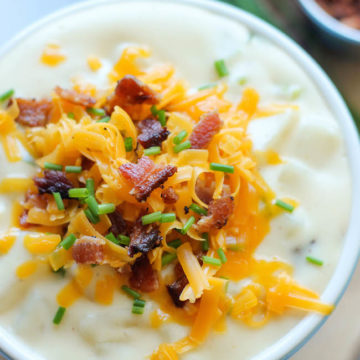 All the flavors of a loaded baked potato comes together in this comforting soup!